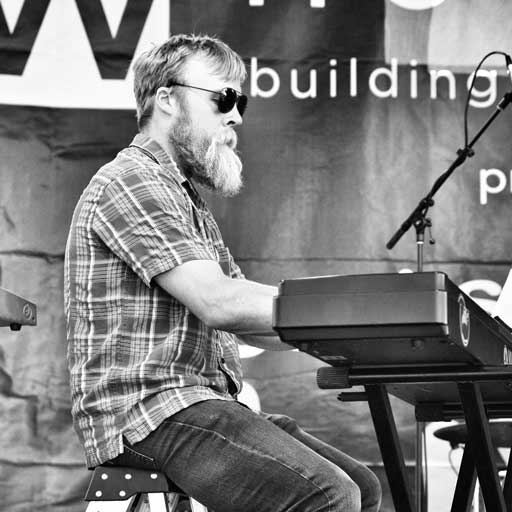 Mike began studying classical piano at age 4, and later jazz at age 11. He graduated with his B.A. in Jazz Piano Performance and Composition from Santa Clara University in 2009. He then toured and recorded with Project Bluebook for two years, notably recording Cheetah Speed produced by Alan Evans of Soulive. Later he recorded BBC material for George Fenton. He worked as a pianist, arranger, and music director on cruise ships, working for Holland America, Seabourne, P&O Australia, and Cunard. Mike then settled in Teton Valley Idaho and slowly began joining bands in the area. Mike is thrilled to be playing with Brother Wolf, Aaron Davis and the Mystery Machine, Ticket to Space, Calle Mambo, Backstreet Jazz & Funk Orkestra, Freida Felcher, Whiskey Morning, Jackson 6, The Granary Trio, Jane Robinett Quartet, and the Jason Fritts Project.

Mike also loves teaching piano and theory. He believes that learning piano is most successful when it’s fun, and people have the most fun when they’re learning the music they love. His success as a performer has always been dependent on his ability to quickly transcribe and arrange, and his success as an instructor utilizes these skills as well. The only way to play in a dozen bands without sacrificing professionality is to write reliable charts and read them well. Imagine taking piano lessons where you only learned your favorite songs– wouldn’t that be great? For dedicated students who learn a song a week, Mike can pump out a new arrangement at an appropriate difficulty level for the student. He also has a deep experience in classical technical development, and rigorous jazz study.