Blu Dog Howlin’ is led by lead guitarist/vocalist Fred Marmsater, who superbly channels SRV, Hendrix and other six & twelve string guitar gods. The pocket is more than held together by well known lay-it-down-local drummer Lyle Newcomb, and bassist Lars Marmsater, who was classically trained in Stockholm, Sweden. Lead vocals, handled by Bev Charette whose known for singing a wide variety of musical genres, is showcasing the low end of her 3-octave voice and loving it. Carl Schiner more than blows and sucks on his harp, which he started playing as a lonely liftie, because it was easier to carry around than a tuba. Dan Tauskey rounds out the mix on keys, lead, rhythm and slide guitar, all of which he finds much easier to play than the cello he was forced to learn in boarding school.

Blu Dog Howlin’ plays rock, blues, pop and funk from the 60’s thru today, as well as original music. 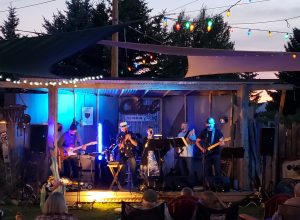